Just before starting the holiday period, a beautiful book was sent to me by the publisher Artdata. A short view into the book learnt me that we had to take the 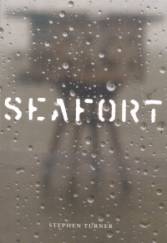 publication with us to our holiday place; to have a better reading and above all looking. The book called Seafort, by Stephen Turner, tells the story in words and pictures in a diary about a weeks long stay from artist Turner on the Searchlight Tower, one of the towers from Shivering Sands. As known the fort was not only used during World War II and the years afterwards by the British Army, but also by radio stations Sutch and City. During the past decades the Thames Estuary, where the forts are situated, Turner has frequently visit this area for artwork. This time his aim was to live for a longer period (five weeks) on the fort to make pictures from there into the Estuary. But is became more an inside look into the mentioned Tower with wonderful stories as well as immense beautiful pictures of what he found on the tower on subjects to be photographed. Parts of equipment left from the war period, wonderful shots taken trough small holes in the walls of the fort, dead birds next to living plants, requests for a Sinatra Boots for walking song and much more.

I always had a fascinating admiration for the people, who have lived and worked on the forts. Most of them have lived there for longer periods but were there with more people. 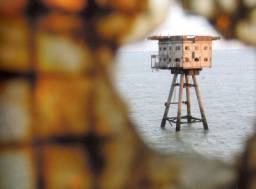 Stephen Turner was taken on the fort and left alone, only to have radio contact once a day. To be totally on your self gives a person to super reflect and rethink human live and the result is a most beautiful book with very interesting daily reports as well as several gracious photographs, which is not only for the art collector a must on the bookshelf but also for the offshore radio listener, who listened in the sixties to those stations. Next to Turners diary and photographs Seafort brings a transcript of a conservation Turner had with Rachel Lichtenstein but also an interesting story Boulevard Solitude by Ian Hunt. In the book also in depth the reader is taken back to the history of the fort. During World War 2 period there was no radio connection at all. The communication was done by telephone with on land, this connected by miles long cord. Interesting are also the shots taken from the webcam, how the author and art maker lived in a tent on the tower during the five weeks in August and September last year.

The book is published by the Seafort Project www.seafort.org. There is more to find on the author/artist and his work.