First I want to ask a question to those who were born before, lets say 1957. Ever thought about being born not earlier than 1965 or later and what you really had missed during the booming time of offshore radio in the sixties? We must be very happy that we can say that the transistor radio was born during our childhood and that radio 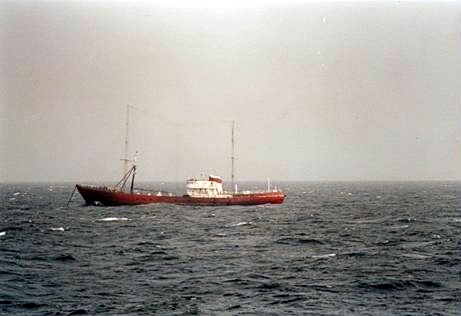 totally changed during the sixties. For those born after, lets say 1965, the being of the transistor radio and the existence of pop radio was something which was quite normal in their life. They didnt have to fight for the freedom as we did. Many of us wanted to be part of the scene as Offshore Radio was something new and was maybe a start for a brighter career. I for myself lost interest in the new stations after Laser Hot Hits went off the air, I even listened a lot less to Radio Caroline in the eighties period. I recorded almost each deejay for the archive, but didnt listen a lot. Suddenly I started listening to those many archive hours after I read the book: Shiprocked. Life on the waves with Radio Caroline, written by Steve Conway.

Its written by a person who wasnt in our age group, but is from a far later period. Steve Conway tells the story of a young Irishman, who has grown up in Ireland and was brought up by his Catholic Parents. In 1984, he decided it was time for Steve to explore himself. He was one of the very first to be experienced in the field of computers and tried to earn his living in England. He quickly got a job and within a few days in his new surroundings he discovered the sound of Radio Caroline on his transistor 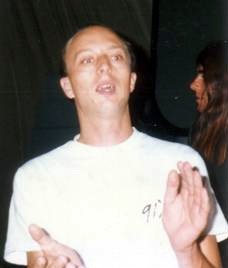 radio, on 963 kHz. He enjoyed himself a lot and had the idea that he could be of use working in the fields during the weekend getting a landbased pirate station on the air. So on his CV South East Sound in London (in the woods near Purley) stand at the top when it goes about his radio experiences. In that way he became friends with the - in Anoraks world well known - John B Burch from the Caroline Movement. The latter organised trips to the MV Ross Revenge from Radio Caroline to bring supplies, newspapers and other things to the radio ship. In December 1985 Steve Conway made, via such a trip, his very visit to the radio ship, starting from the harbour from Strout, near Chatham.

Another person he met was Carolines Richard Jackson who stimulated Steve to train himself in selecting and writing news reports as well as reading the news. Finally Steve Conway made his first demotape in November 1986 and was sent to the Caroline Postal Address. He waited and waited and nothing happened till he heard something which was typical for Radio Caroline, that the demotape was lost. A new one was made and on the 24th of February 1987, the first stint on Radio Caroline started after Steve had made a long trip from Dover in England to Dunkirk in France from where another trip with the MV Bellatrix - one of the station tenders - started to the big red Ross Revenge with the high transmitter mast. When he was on the ship, Mark Mathews, one of his colleagues, asked him if he would, next to re 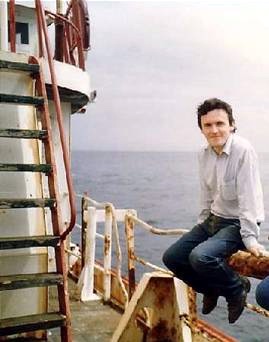 ading the news, also present radio shows. Steve refused this. Two more request for doing radio shows were made, the third one was more than a command from chief engineer Peter Chicago and so during his second weekend on the radio ship, he presented his very first programme and many hundreds of hours would follow.

Steve was of course a subject of practical jokes by other deejays during his first stint and even got, like most of the deejays in offshore radio, a nickname, which was Steve Condom Conway. From this point on Steve recalls a lot of things which have happened during his years on the radioship and with Caroline. For instant he tells about the very first time Ronan ORahilly, the then station owner, visited the radioship for the first time since the sinking of the former Caroline ship MV Mi Amigo, way back in March 1980. There is one of the few mistakes I found in "Shiprocked. Life on the waves with Radio Caroline, written by Steve Conway." Ronan visited the crew to talk about the then forthcoming extending jurisdiction, so they had to leave Knock Deep and anchored the ship on a new location. However Ronan had been on the Ross Revenge before when promotion had to be made world wide that Caroline came back from a new radio ship in August 1983.

Of course a lot of things are happening within the family living together for several weeks on a radio ship in international waters. They are packed together without seeing for ages other people, family or friends. This led to many hilarious things, even to the first sexual experience in Steve his life. In some of the stories, written in the book, Steve changed the names to protect the people involved. Insiders who followed the happenings and programming of Radio Caroline, so can I assure you, can fill in the real names. Steve takes you to a lot of stories. For instant about Captain Jim, who was so afraid to be on the radio ship that the deejays sent out a secret code: captain incompetent, please send replacement. Also he recalls the day when Caroline was 25 years of age; the long story about the big hurricane in October 1987, the really gorgeous offer by Robbie Dale, who worked in the sixties on the station, to send equipment after the station got in serious problems after the mast came down. From that point on many things happened or didnt happen. Promises, compared with working out a promise is strange in the world of Radio Caroline. 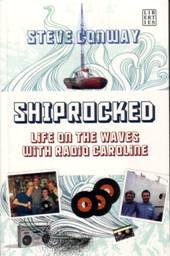 Steve also was on the radio ship when suddenly the Dutch sister station went off the air and most of its team left the Ross Revenge. Many of the 56 rooms on the ship stayed empty for a longer period and it seemed the ship was run on shoestrings. Ronan came with the idea of a wonderful fantasy mast, which would be higher than the original and should be delivered by a helicopter. Ronan dreamt on and a few other masts were tried out, bringing again a lot op problems, too. Also the raid in august 1989, is described in one if the many interesting chapters, which have all a song title or the name of a well known group from that period. Very interesting was the story of smuggling mast parts in a sightseeing bus into the harbour of transport. A photo demonstrates that on the bus there was a promo poster for LBC, the then news station for Greater London. Next to the earlier mentioned tender Bellatrix there were also the more dangerous trips from British harbours, right through the night under very difficult situations. Not forgotten is the celebration of "25 Years of Radio Caroline", the visit of a BBC television crew on the ship while there was at the same moment a fire in the engine room. Steve also recalls in "Shiprocked. Life on the waves with Radio Caroline" the late days of the station within international waters when Caroline had to leave 558 kHz due to the fact that Londons Spectrum Radio officially got the frequency. That meant no more advertisers or other backers and so at one stage it was decided to stop transmissions when another new act came into law. The Ross Revenge stayed in international waters until November 19th 1991. The crew came in terrible problems and was taken off during a storm on the Fall Heads. Steve was there and in his book he shares so many memories of his life during the many years with Radio Caroline. It is absolutely a must to order this book and to have a good read.