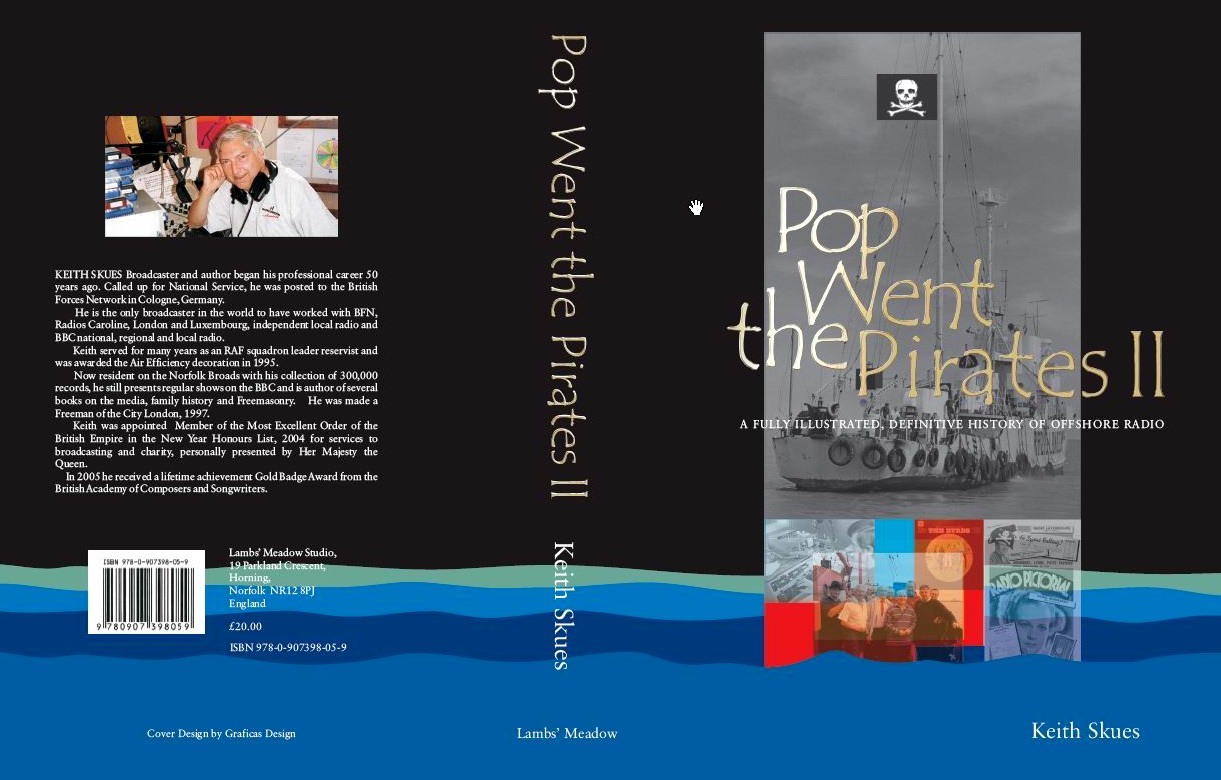 Its some month ago that the postman at the post office mentioned me that a big parcel had arrived which was too thick to push in my postal box. Indeed, it was not only thick but also heavy. The parcel came from England and believe it or not, Keith Skues did it once again. Pop went the Pirates II has been released; just 15 years after the first version came from the printers. The book is so very impressive, with many interesting chapters which lead us to the many ins and outs in the history of Offshore Radio. I never had before it so difficult to decide where to begin with writing a review on a book. It was in 1994 that the Dutch release of the book Pop went the Pirates was released on the Annual Radio Day, that year held in Utrecht. Some months earlier the official release took place during the celebrations that Radio Caroline became 30 years of age! In the year that the movie The boat that rocked was officially released in Britain and other events took place to commemorate the success of Offshore Radio in the past, Skues hits the headlines again with the second part of Pop went the pirates.

First remark is that this time the book is printed on glossy paper, whereby the photos and other illustrations are far much better of quality as in the first edition. Hundreds of known and unknown photographs for the common radiolistener are published in the book and reason enough to by also the second edition, which is for the first 540 pages the same contents as the publication from 15 years ago. My advices: give the first publication to a son or daughter and if you dont have one please think about a niece or nephew.

So the next thing was to reread the bible Skues wrote in earlier years and runs up till page 540 in the new edition. Wish there was a radio church and I would love to read parts each Sunday on the pulpit, week after week to get a brighter and shining audience. The new chapters recall the fact that still, 19 years after the last offshore station in international Western European waters stopped transmissions, theres still much interest amongst a certain band of radio enthusiasts. They have of course the access to the world wide internet, so it becomes far much easier and cheaper to get in keep in contact with each other to communicate about their favorite medium, which was and still is offshore radio. Of course there were, after the first edition was released in 1994, the small offshore project of the Yugoslavian coast, as well many stations off the Israeli coast  including the Voice of Peace. Skues also did not forget to mention the only one weekend transmissions from Offshore 98 but most of the memories in the book are from earlier days.

In Chapter Fourteen, This could be the last time Skues not only memorise about the past but tells the reader about the many so called RSL transmissions, which have been on the air through the years to bring memories to the several offshore radiostations which have been on the air in the past. RSLs for RNI, Caroline, Swinging Radio England, Radio London and many more. For some of the projects Skues was also asked to do programmes and reading the chapter you can feel the enthusiasm there is to relive the sounds from those golden years gone by.

Interesting to mention is that Keith has added a special short interlude about the offshore television stations like the RTV Noordzee from the REM platform of the Dutch coast, the Tower TV try out, Syd TV as well Odelia TV off the Israeli coast. Attention is also paid to the projects off the Chinese coast and Radio New York International on the MV Sarah, way back in 1987. He didnt forget to update the reader with what had happened to the good old lady, Radio Caroline, since 1994. Of course the earlier mentioned RSL transmissions were there, but also many other ways station manager Peter Moore and his team managed to bring Radio Caroline on the air on cable networks and satellite transmissions and on AM boomers in the former Eastern Europe Countries.

Keith also gives a look into the kitchens of the several reunions which have been organised by several people, including Mary and Chris Payne and the Jon Myer of the Pirate Hall of Fame; he tells the story the way the former bell of the MV Galaxy was brought by Ron Bunninga, the captains son, to the US. This happened when former shipmates, when the Galaxy was still the mv US Density, got together for their reunion. Just like in his first part of Pop Went the Pirates Keith Skues gives space to other authors. One is called Paul Rowley who wrote Pirate Memories from a BBC Political Correspondent. Another co writer is Jenny Matthew, a life-long fan of radio, who wrote From Pram to pop.

Of course Skues didnt forget this years reunions, the exhibition on the Isle of Man as well as the release of the movie The Boat that rocked. Coming to Holland again in November for the first time in 15 years to the Annual Radio Day in Amsterdam to be interviewed by Tom Mulder, it will be a silenced crowd during the interview. That I know for sure as all in the big room will be listening to the many stories Keith Skues has to tell about his own very long and wonderful career. So, to end the review I can only tell that the bid is open to do readings on Sunday on the pulpit. But this will only happen if you all order a copy of this wonderful book.