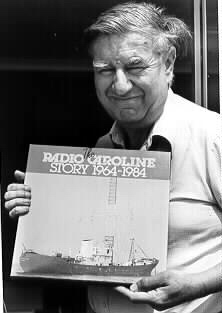 Monitor Memories. The Second Wednesday in January 1977 was an atrabilious day for Dutch Justice as well as for the late Samantha Dubois (Ellen Kraal) from Radio Caroline. She was asked to tell her own story of what happened when she was summonsed to appear before the Magistrates accused of broadcasting on Radio Caroline. So here once again in here own words, is the account of her experiences: I went to the court on the 12th of January in Amsterdam. I didnt have a lawyer because its to expensive to pay.

There were three witnesses in the court to testify against me: ex crewmen Guenther the Cook, Derek the generator engineer and Jan, the sailor. The Dutch Court is really Micky Mouse. I am very ashamed of being of Dutch Nationality. Why do I say that? Well, firstly there wasnt a jury. I pleaded not guilty. So the court called on of the witnesses, in that case it was Jan the sailor. The court asked him if he recognised me as being Samantha, alias Ellen Kraal broadcasting illegally on board the ship called the MV Mi Amigo.

Well, much to my surprise Jan denied everything. He said that he never knew me. If that had happened in a British court the second witness would be called up. But the Dutch wankers just warned Jan that he was committing perjury and he could get up to six months imprisonment for going back on his word. I was found guilty and giving three weeks suspended sentence plus 200 pounds fine. The three week suspended sentence is for 2 years. So if I get caught within 2 years I go to jail for 3 weeks. Actually Im going back to the ship. I havent paid the fine, and Im not planning to either which means 40 days imprisonment. The only reason why I was taken to court is because of the three above mentioned people signing a statement under oath that they were with me on the ship and saw me broadcasting in English.

Samantha had certainly the courage of her conviction in those days. The late Buster Pearson wrote in 1977: Perhaps if there was more of here buccaneering spirit around the outlook for offshore radio would be a brighter one. Sadly neither Buster Pearson nor Samantha are no longer with us. During the last two Radio Days spontaneity comes around when one or more of the guests are mentioning the names of the people who are no longer with us, the names of Samantha and Buster Pearson should be there too the next time!

But there were more justice happenings in January 1977 as on the 27th a large crowd got together outside the Magistrates Court in Southend on Sea in Essex. Once again lets see what Monitor editor Buster Pearson told about the get together: They were free radio supporters who had arrived from all parts of the country to peacefully protest at the way the Home Office wasted public money and Police time by harassing harmless folk whose crime is apparently treating persons on board the radio ship Mi Amigo as fellow human beings.

What had happened on forehand in August 1976, was the work of a detective constable from the Police Headquarters Drugs Intelligence Section. His name was Gary Skull. He played a fool at everybody as he intended to go out to the radio ship Mi Amigo pretending he was an anorak like you and me still are in 2007. He talked with all the other people on the tender and told them he was a free radio fan with the name Simon Martin. Oh man, what a mean man he was as he was testifying to his superiors  after coming back at the office  that he had seen the organiser of the trip handing over newspapers and mail over to the guys on the radio ship Mi Amigo. The organiser was Dave Hutson and the fake Anorak mentioned also that Dave was wearing a Caroline badge, which of course was promoting the station. This of course was forbidden by the 1967 Marine Offences Act. So Dave was ordered for court and on January 27th 1977 and with him the owner of the ship, which went out to the Mi Amigo, appeared in Southend on Sea It was Arthur Ord, and old age pensioner and ex commando. Like the earlier case with Samantha neither one of those two felt they could afford a lawyer, as the fees for that were to high. Both pleaded guilty to the charges laid against them. The next is what the newspaper Standard Recorder had to say about the court case some days later(February 4th 1977):

Pirate Radio Supporter Scuppered. Pirate Radio Supporter David Hutson was determined to keep Radio Caroline afloat. Not only did he supply the outlawed stations disc-jockeys with letters and newspapers but he organised boat trips to the MV Mi Amigo and even published an advertisement in the form of a Radio Caroline badge. These were purchased by the passengers on a trip to the vessel. But Hutson, 27, a storeman of Sandon Road, Vange, got into deep water with this hobby, for his actions contravened the Marine etc Broadcasting Offences Act. And at the Southend Court last week, he was find a total of 125 Pound with 20 Pound costs. Boatowner Walter Ord, 68, of Brightlingsea, was find a total of 125 Pounds with 20 Pound costs, also for supplying newspapers and letters to the ship. He had a former conviction for taking a passenger of the radio ship. The fines were met with gasps and groans from the public gallery, were Free Radio Supporters had gathered.

Nice to see a small article appeared in a local newspaper, probably a weekly, days after the court case, almost 30 years ago from today. On the court case a certain Mr Orlando Pownall, appearing for Hutson, told the people in court it would become time that Independent Radio would become legal. Well there were already independent radio stations on land in Britain since 1973 with LBC as the numero uno! Another negative speaker at the court was Miss Jeraine Roberts, for the director of Public Prosecutions, as she told the court that following an advertisement for boat trips to view the MV Mi Amigo, Gary Skull posed as a passenger aboard Ords trawler. She said each of the 12 passengers bought a 15 p Radio Caroline badge, offered by Hutson. Alongside the Mi Amigo Hutson threw aboard passengers requests for records, plus their newspapers and letters for those onboard. Of course the Police had to come in force and at the court case the attendees learnt that the Home Office officials boarded, in cooperation with the police Ords trawler. Hutsons comment afterwards was good for a laugh way back in 1977 but also 30 years on: You can do burglary and get less. I dont see what we have done wrong.

Well think about the time and money put into this court case, the money they were making out of the prosecutions, compared to the super de luxe reception murderers and other criminals are getting then and now!